An Internal Combustion Engine is a combination of various types of parts. When I. C. Engine parts function in a pre-determined way, you will convert the chemical energy of fuel into mechanical energy.

One is Spark-Ignition Engine (SI Engine) which is also known as Petrol Engine. Another is compression ignition engine (CI Engine) also known as Diesel Engine.

The working principle and parts of both the engine are almost same, the only difference is in fuel burning process.

To get the detail on working with a petrol engine and diesel engine, read these articles.

In this post, I will share the detail information on internal combustion engine parts. So, you can better understand the parts of an engine and their functions.

The function of main parts used in Internal Combustion Engine 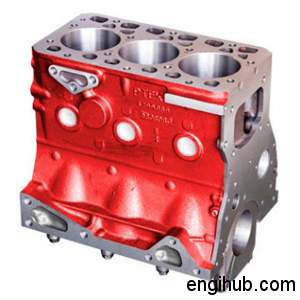 Cylinder or cylinder block is also known as Engine Cylinder Block. This is the part where combustion of fuel is carried out. The main function of a cylinder is to allow the piston to reciprocate inside.

In-cylinder bore, a fresh charge of the air-fuel mixture is ignited. This charge is compressed and expanded hence piston can work further.

Due to fuel combustion, extreme heat is generated. So, to carry out generated heat water jacket is provided in a water cooled engine. In air-cooled engines, fins are provided to cool the cylinder block.

To withstand high temperature and pressure, engine cylinder block is made from high grade cast iron. The engine block is manufactured in one piece by casting process. 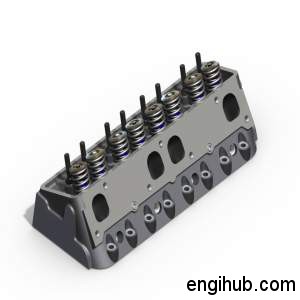 The main function of a cylinder head is to seal the cylinder block from the upper side using a head gasket. So, the leakage of the air-fuel mixture and burnt exhaust gases are totally arrested.

To admit a fresh charge of the mixture inside the cylinder block, Intake Valve is mounted on a cylinder head. While exhaust valve is mounted to escapes burnt exhaust gases to the atmosphere through the silencer.

A spark plug is mounted if the engine is spark ignition type (SI Engine). While in Compression Ignition type engine (CI Engine), a fuel injector is mounted on the cylinder head.

A cylinder head is usually made by casting or forging process in one piece of cast iron. Also in some cases, it is manufactured from aluminium. 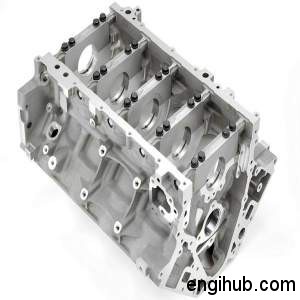 The crankcase is a body that holds all the other engine parts together. This is the largest parts of the engine, but must be designed to be strong and light in weight.

This part is also known as Oil Sump. The lube oil is filled in the crankcase for lubrication of engine. A dipstick is also provided to check the level of lubrication oil.

As mentioned earlier, an engine block is mounted on the crankcase. An engine gasket is placed between crankcase and cylinder block to arrest the leakage.

The main purpose of the crankcase is to contain the lube oil and serve as housing for the Crankshaft.

The crankcase is typically made of cast iron in one piece via sand casting. Aluminium sand casting process is used to manufacture crankcase from Aluminum. 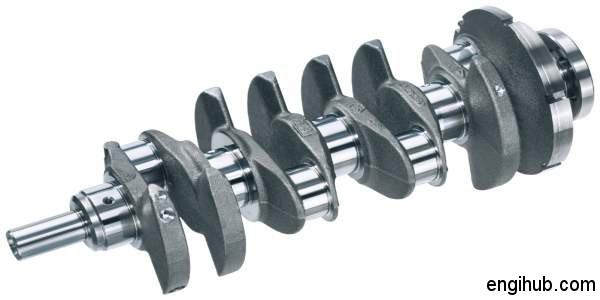 The main function of a crankshaft is to convert, linear to rotational motion. It means piston’s linear motion is converted into rotary motion.

To complete the conversion of these two motions, a crankpin is provided on a crankshaft. Crankpin is also known as “crank throws”.

The counterweight is provided on the crankshaft to partially balance the forces of the reciprocating piston and reduces the load on crankshaft bearing journals.

Also Check: Construction and Function of Crankshaft used in I. C. Engine

The number of crank pin and so counterweight is depend on engine design. A product development engineer or design engineer trying to keep the lowest length of a crankshaft. Hence, highest balancing can be achieved.

A crankshaft seal is provided so you can avoid lube oil leak. The crankshaft is mounted on bearing which delivers its motion to a flywheel.

It is a one-piece part which cast in ductile steel. Nowadays, forged crankshafts are used due to lighter weight, more compact design, and better inherent damping. 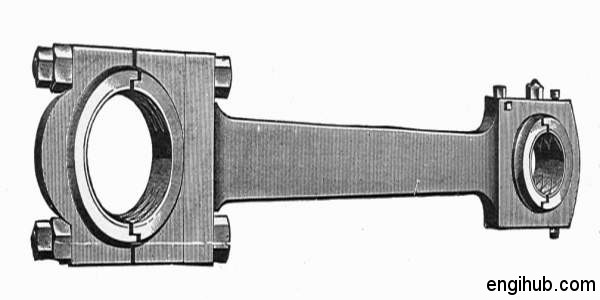 Connecting rod’s big end is connected to crankshaft while small end connects to the piston.

In most cases, the connecting rod is hollow or provided with an internal cast oil duct to supply the gudgeon pin with lubricant.

Depending upon the requirement, connecting rod is made of High-grade aluminium, Micro-alloyed steels. For the high-performance engine, it is made of titanium. 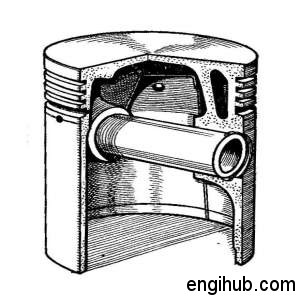 This is a cylindrical part that slides to and fro in a hollow cylinder. The main function of the piston is to transfer force from expanding gas in the cylinder to the crankshaft via a connecting rod.

During suction stroke, it sucks the fresh charge of air-fuel mixture through the inlet valve. Compresses during the compression stroke and also forces the burnt exhaust gases out of the cylinder through the exhaust valve.

The piston should be light in weight but sufficiently strong to withstand the gas pressure generated because of combustion.

So, Pistons are cast from aluminium alloys. For better strength and fatigue life, some racing pistons may be forged instead. Sometimes pistons are made from Cast Iron also.

The piston ring is provided on the piston for good sealing and less friction in between cylinder wall and piston.

It prevents the compressed charge of fuel-air mixture from leaking to the other side of the piston.

Piston Rings are split at one end so they can expand or slipped over the end of the piston.

Oil ring is used for removing lubricating oil from the cylinder after lubrication. This ring prevents the excess oil to mix with charge.

The main functions of piston ring are as below

It is important that rings float freely in their grooves within the piston so that they can stay in contact with the cylinder.

Most piston rings are made of a very hard and somewhat brittle cast iron. Sometimes it is made of alloy spring steel also. 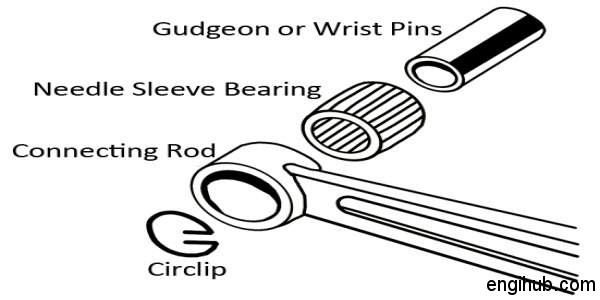 The gudgeon pin or wrist pin or piston pin connects the piston with connecting rod. It is subjected to a combination of shearing and bending loads.

Gudgeon pin has to operate under some of the highest temperatures experienced in the engine.

The gudgeon-pins are in tubular shape, which provides adequate strength with minimum weight.

They are usually made from low-carbon case-hardened steel composition 0.15% carbon, 0.3% silicon, 0.55% manganese, and the balance 99% iron. 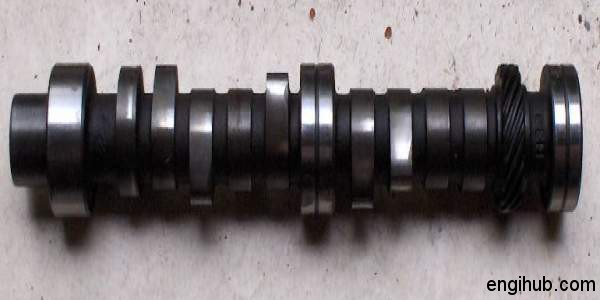 The main function of a camshaft is to open and close the intake and exhaust valve at proper timing.

So, to regulate the valve timing, lobs usually called cams are used. Cams are oval in shape and it exerts a pressure on the valve to open and release to close.

It takes driving force from crankshaft through gear train or chain and operates the inlet valve as well as exhaust valve with the help of some other parts as like cam followers, push rod and rocker arms.

Camshafts can be made from several types of material. Out of that chilled iron camshafts have good wear resistance since the chilling process hardens them. For high-quality camshaft billet steel is used. 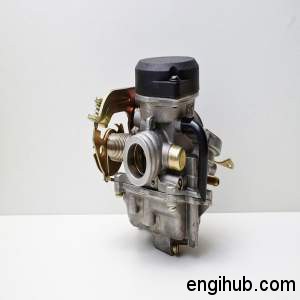 The main function of the carburettor is to blends air and fuel in the proper ratio for combustion in an internal combustion engine.

It converts petrol in a fine spray and mixes with air in the proper ratio as per requirement of the engine.

In simple, a carburetor is a tube that allows air and fuel into the engine through valves. 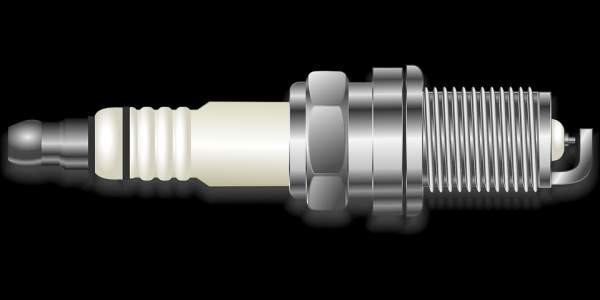 This part is used in Spark Ignition Engine (SI Engine) only. The main function of a spark plug is to deliver electric current from an ignition system to the combustion chamber. So, compressed fuel/air mixture is ignited by an electric spark.

A spark plug consists of a metal threaded shell which is electrically isolated from a central electrode by a porcelain insulator.

The spark plugs metal shell is screwed into the engine’s cylinder head hence it is electrically grounded.

Spark plug replacement is rarely required due to its robust construction. 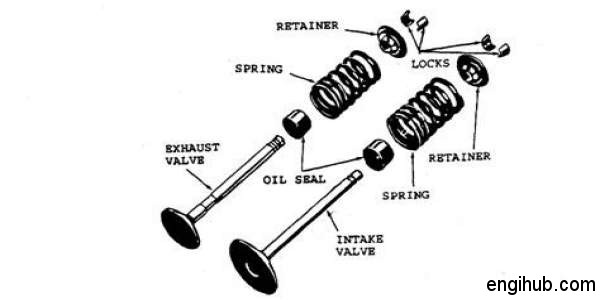 In every internal combustion engine, two types of valves are used.

An intake valve is mounted on the cylinder head to supply the fresh charge of the mixture inside the combustion chamber.

An exhaust valve is also mounted on the cylinder head to permits the burnt gases to escape from the cylinder bore at proper timing.

The quantity of intake valve and the exhaust valve is depending upon the number of cylinders of an engine.

Inlet valve and the exhaust valve is operated by a camshaft. The camshaft uses lifters, pushrods and rocker arms to activate the valves.

Proper timing of the opening and closing of the valves is required for the engine to run smoothly. The camshaft controls valve sequence and timing. 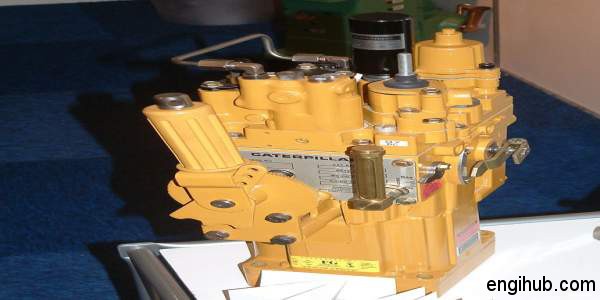 As the name indicates, it controls the speed of the engine by controlling the fuel supply.

Diesel engine speed control will be achieved by the governor at a different load by regulating fuel supply.

The upward motion of governor sleeve operates the throttle valve to decrease the supply of the fuel. Hence the speed of an engine is governed. 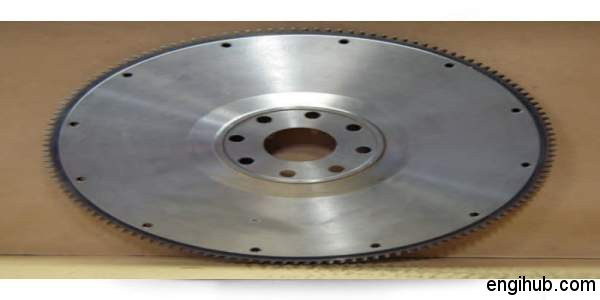 The flywheel is a disk that is mounted at one end of the crankshaft to provide inertia for the engine.

Flywheel smoothes out some of the rpm and force deviation by its resistance to acceleration.

The flywheel supplies the inertia required to prevent loss of engine speed and possible stoppage of crankshaft rotation between combustion intervals.

Flywheels are typically made of steel or cast iron. 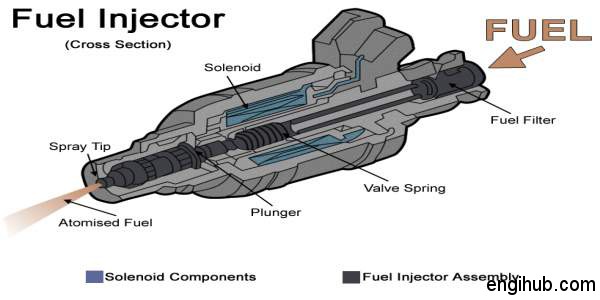 Basically, an injector is one of the parts of total fuel delivery system.

Fuel injectors are electronically controlled mechanical devices that are responsible for spraying (injecting) the right amount of fuel into the combustion chamber of an engine.

Injectors must also disperse the fuel at the right angle, pressure and spray pattern.

The injectors are controlled by the Engine Control Unit (ECU). Engines have several fuel injectors and they are often connected to a fuel rail.

Fuel injectors are located in the head of the engine and are threaded into the combustion chamber with the nozzle inside.

So, this is all about parts of an internal combustion engine.

So, here you find Best Engineering Resources for further details

To get the more details about internal combustion engine and its parts, I further recommend reading

1 thought on “Parts: 15 Important Parts of Internal Combustion Engine You Must Know”