Many of us use motorbikes or cars for traveling purposes. How much do you know about the engine and its works?

Those who are from the mechanical engineering or automobile engineering field may familiar with the working principles of two-stroke engines or four-stroke cycle engines.

A most common man is unfamiliar with working with the engine. So, here I will like to share the information on the advantages and disadvantages of this type of engine. 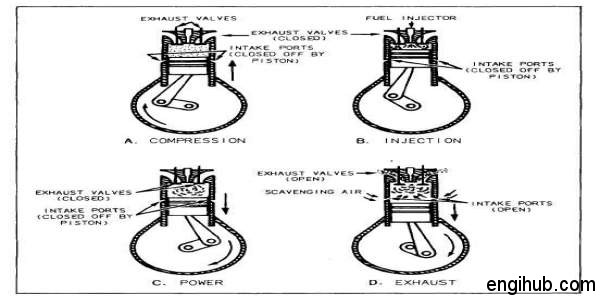 The power developed per kilogram of engine weight is higher in this type of engine. Hence it is more suitable for motorbikes and scooters.

02) The two-stroke cycle engine gives one working stroke for each revolution of the crankshaft.

Hence theoretically the power developed for the same engine speed and cylinder volume is twice that of a four-stroke cycle engine which gives one working stroke for every two revolutions of the crankshaft.

03) We can use a lighter flywheel in a two-stroke cycle engine as there is one working stroke for each revolution of the crankshaft.

04) The design and construction are much simpler than a four-stroke engine that’s why it is easy to manufacture and cost-effective.

05) As there is no suction and exhaust valve used in this type of engine hence no need for cams, camshaft, rockers, etc. of the valve gear, which in Result produces higher mechanical efficiency.

06) Due to two suction and exhaust ports only, there is work saved by avoiding friction.

09) A two-stroke cycle engine can be easily reversed if it is of valveless type.

10) Due to simplicity in construction and fewer parts, two-stroke cycle engines are easy to maintain. Hence reduce the initial and maintenance cost also. 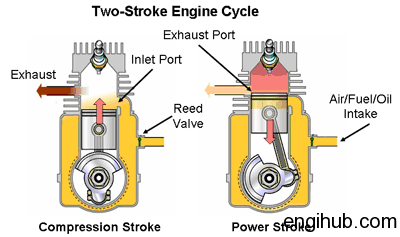 01) The fuel consumption is higher in a case of a two-stroke engine working on the Otto cycle. This happens due to some of the fuel or un-burnt gas likely to be wasted by escaping through the exhaust port.

02) Since the ports remain open during up word stroke, the actual compression starts only after both inlet and exhaust ports have been closed.

Hence actual compression ratio and thermal efficiency of a two-stroke cycle engine are less than that of a four-stroke engine of the same dimension.

03) The dilution of charges takes place due to incomplete scavenging.

05) There are greater wear and tear of moving parts hence it gives loud noise.