Skip to content
Solex carburetor is widely used by many top European automobiles like Rolls-Royce, Porsche, Volkswagen, and Mercedes Benz.

In Indian automobile engineering, Fiat cars are the most popular brand due to their very easy start in cold conditions.

This easy start is obtained by Solex Carburetor. This is a downdraft type carburetor and has special provisions to supply, the richer mixture at starting of the engine.

It will weaken supply gradually till the engine reaches its normal running speed.

Solex carburetor is available in many designs and all have the following work circuits, 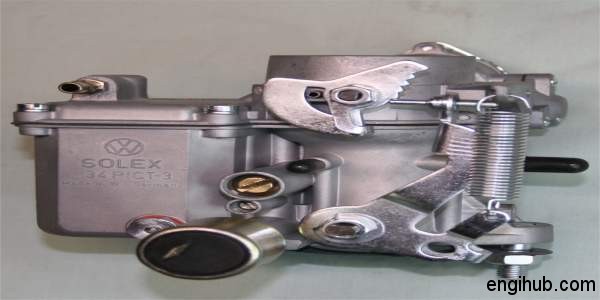 So, the Solex Carburetor Working Circuits are

The throttle valve remains in a closed position during starting.

Starting Valve which has different sizes of holes is made from a flat disc.

The position of various holes can be adjusted in front of the starter petrol jet by the starter lever. Then the air is mixed coming from the starter air jet.

This air-fuel mixture passes through another hole of the starter valve, in a passage of the carburetor, below the throttle valve.

The suction stroke of the engine sucks this mixture into the cylinder.

Thereby reducing the quantity of petrol, this weakens the air-fuel mixture.

Similarly, next to smaller hole of the starter valve is brought in front of starter petrol jet till the engine attains its normal speed.

Then after the starter valve is closed by bringing the starter lever to its off position.

At normal running speed, starting circuit is closed and the throttle valve is opened.

The normal running circuit consists of the main jet which receives the petrol through the second passage.

This is done from the float chamber as the throttle valve is opened sufficiently.

The air is drawn through the venture where the petrol mixes up with it.

This forms a suitable mixture for the normal running of the engine.

In this case, only the throttle valve governed the air-fuel ratio.

The engine requires an extra rich mixture, during the acceleration period.

To obtain an extra rich mixture, the fuel is pumped under pressure into the main air passage.

The diaphragm pump is used to create pressure, which is actuated by a lever connected to the accelerator.

The pump sucks the petrol from the float chamber through the pump valve.

Then forces it through a third passage into the main passage through an injector above the venture of the carburetor.

During the idling operation, the throttle valve is kept closed.

While an engine receives the mixture through a port opening below the throttle valve.

Where area can be varied by an idle adjusting screw according to the need of the engine.

The petrol is supplied to a pilot petrol jet from the main jet fuel circuit through a fourth passage and the air from a pilot air jet.

The petrol and air thus supplied mix up in the idle passage.

Then go to a port situated below the throttle valve from where the mixture is sucked into an engine.

During the slow running, the engine draws the mixture from the idle passage through a hole.