Skip to content
A simple carburetor has some disadvantages hence it cannot be used in every engine.

Before proceeding further, let’s see the definition of carburetion.

The engineering definition of carburetion is “The process of breaking up the fuel into minute particles and mixing it with air”. A Simple Carburetor can also do this very well.

The fuel is completely broken into minute particles, vaporized, and mixed with air in the proper ratio in a device known as a carburetor.

Though in theory, everything is perfect, in practice it may not happen every time. There are some limitations to the use of a simple carburetor in some applications. 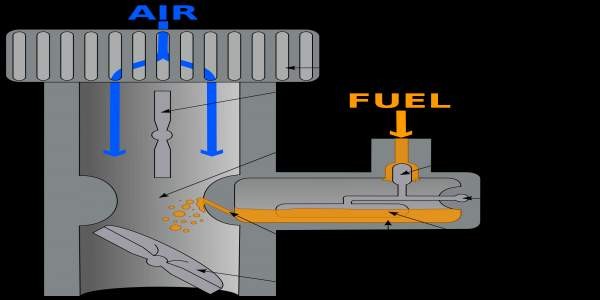 01) At a very low speed, the mixture supplied by this Carburetor is so weak that it will not ignite properly.

And for its enrichment, under such conditions, some arrangement in the carburetor is required to be made.

02) The working of a simple carburetor is affected by changes in atmospheric pressure.

Carburetors used in aircraft are to be provided with altitude control. As the rich mixture is unnecessarily available, due to less density of air.

03) The working of a simple carburetor is affected by changes in atmospheric temperature.

If the setting is done in the winter season, it will be found to give the too rich mixture in the summer.

This is happened due to less density of air with the rise of temperature to a greater extent than the density of the fuel.

04) It gives the proper mixture at only one engine speed and load, therefore, suitable only for engines running at a constant speed.

Increase or decrease, the quantity of fuel issuing out will change and not match the velocity of air flowing through the venture and the proper mixture does not take place.

To overcome these various modifications have to be made to the simple carburetor.

05) In a simple carburetor, the mixture is weakened when the throttle is suddenly opened. Because the Inertia effect of the fuel prevents the proper quantity of fuel from flowing immediately.

Can we still use Simple Carburetor?

To overcome limitations there are some modifications are made and developed new kinds of carburetors. These new carburetors are available in the market now.