Skip to content
A chiller is a machine, which provides a cool workplace. Hence the efficiency of workers and machines in an engineering plant can be increased under controlled temperature conditions.
So, to control the temperature of a space, air-conditioned machines (chillers) are used.
Depending upon the area to be cooled various types of conditioners are invented.
These machines work on different working principles. Here you will find the information on the chiller and its important parts. 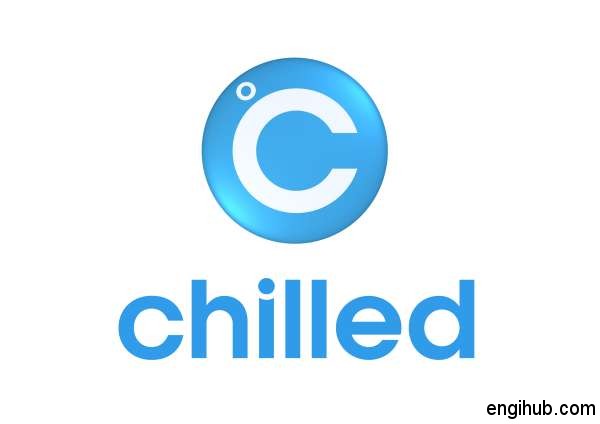 So, Here you will know about Chiller Which is Run By vapor absorption technology

A vapor is a substance in the gas phase at a temperature lower than its critical temperature.

So, it means that the vapor can be condensed to a liquid or to a solid by increasing its pressure, without reducing the temperature.

The critical temperature of a substance is the temperature at and above which the vapor of the substance cannot be liquefied. Here, no matter how much pressure is applied.

The critical pressure of a substance is the pressure required to liquefy a gas at its critical temperature.

The vapor pressure is the equilibrium pressure from a liquid or a solid at a specific temperature.

Absorption is a physical or chemical phenomenon.

A process in which atoms, molecules, or ions enter some bulk phase – gas, liquid, or solid material.

Absorption is basically where something takes in another substance.

So, a chiller is a machine that removes heat from a liquid via a vapor-compression or absorption refrigeration cycle.

Absorption chillers utilize water as the refrigerant and hence rely on the strong affinity between the water and a lithium bromide solution to achieve a refrigeration effect.

Central chillers generally have capacities ranging from ten tons to hundreds or thousands of tons. 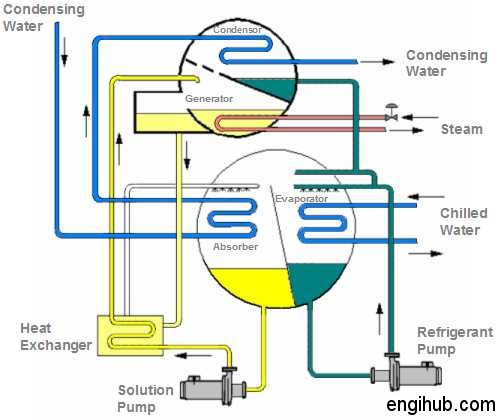 The single-effect absorption cycle uses water as the refrigerant and lithium bromide as the absorbent.

It is the strong affinity that these two substances have for one another that makes the cycle work.

The entire process occurs in almost a complete vacuum.

A dilute lithium bromide solution is collected at the bottom of the absorber shell.

From here, a hermetic solution pump moves the solution through a shell and tube heat exchanger for preheating.

After exiting the heat exchanger, the dilute solution moves into the upper shell.

The solution surrounds a bundle of tubes that carry either steam or hot water.

The steam or hot water transfers heat into the pool of dilute lithium bromide solution.

The concentrated lithium bromide solution moves down to the heat exchanger.

Where it is cooled by the weak solution being pumped up to the generator.

The refrigerant vapor migrates through mist eliminators to the condenser tube bundle.

A refrigerant vapor condenses on the tubes.

The heat is removed by the cooling water which moves through the inside of the tubes.

As the refrigerant condenses, it collects in a trough at the bottom of the condenser.

The refrigerant liquid moves from the condenser in the upper shell down to the evaporator in the lower shell.

Then after it is sprayed over the evaporator tube bundle.

Due to the extreme vacuum of the lower shell, the refrigerant liquid boils at approximately 39°F (3.9°C).

This will create the refrigerant effect. (This vacuum is created by hygroscopic action – the strong affinity lithium bromide has for water – in the Absorber directly below.)

As the refrigerant vapor migrates to the absorber from the evaporator.

The strong lithium bromide solution from the generator is sprayed over the top of the absorber tube bundle.

The strong lithium bromide solution actually pulls the refrigerant vapor into the solution, creating an extreme vacuum in the evaporator.

The absorption of the refrigerant vapor into the lithium bromide solution also generates heat which is removed by the cooling water.

The now dilute lithium bromide solution collects in the bottom of the lower shell, where it flows down to the solution pump.

The chilling cycle is now completed and the process begins once again.

So, Here you find the Best Engineering Resources for further details
It is quite possible, that the information I shared here will not cover the topic deeply. Hence I recommended you further read An Introduction to Heating and Cooling Upgrades for Buildings for Energy Efficiency and Absorption Chillers and Heat Pumps
If you like the post, share it with your friends and also on social sites.