So, I hope, you got the answer to the question, what is geothermal energy? Now let’s go further.

Another example of heat energy is solar power. If you like to know about solar energy, here you will find detailed information.

What Are The Sources Of Geothermal Energy?

There are two sources of geothermal energy; one is the leftover heat from the formation of our planet and the second is the radiogenic heat.

Radiogenic heat is the heat resulting from radioactive decay on Earth. Both heat sources are naturally occurring and provide abundant energy. This heat energy can be harnessed for human energy needs, especially electricity.

You can harness energy from the ocean also. This is called tidal power. You will get more detail from here, 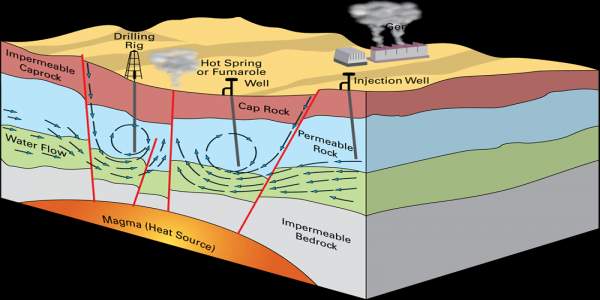 It was not until the start of the 20th century that geothermal power was used to make electricity. In 1904, Italian scientist Piero Ginori Conti invented the first geothermal electric power plant in which steam was used to generate power.

The first geothermal power plant is started in 1922 in the USA with a capacity of 250 kilowatts. It produced little output and due to a technical glitch had to be shut down.

Some of the common geothermal energy examples include the hot water springs which are used for bathing and cooking. Many people believe the hot, mineral-rich waters have natural healing powers.

Some power plants can utilize hot steam from vents on the Earth to generate electricity. 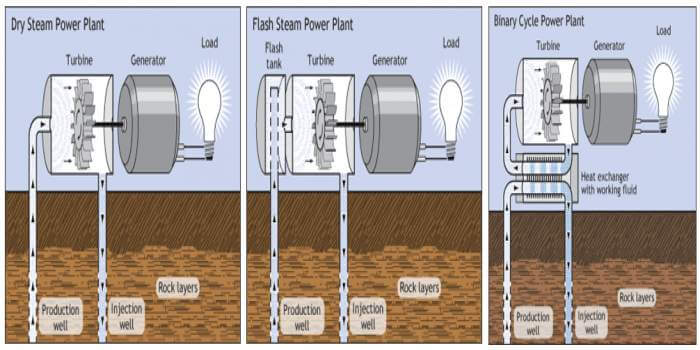 Engineers use these resources by drilling wells into the earth and then piping steam or hot water to the surface. The hot water or steam powers a turbine that generates electricity.

The unused steam is cool down in the condenser and returned back to the soil in a water form.

As it flows upward, the pressure decreases, and some of the hot water boils into steam. The steam is then separated from the water and used to power a turbine/generator.

The moderately hot geothermal water is passed by a secondary fluid with a much lower boiling point than water. This causes the secondary fluid to flash and vaporize, which then drives the turbines.

A geothermal system operates quietly. Hence it doesn’t produce any noise pollution. Noise pollution is a big issue in generating electricity from wind power which is eliminated with geothermal power.

Unlike other renewable energy technologies such as solar power or wind power, geothermal power is not dependent on weather conditions. Hence you will get a constant energy supply for your geothermal power plant.

The initial setup cost of a geothermal power plant is considerably high when compared with the power plants that produce electricity from other non-renewable energy sources such as coal and oil.

The process of Hydraulic fracking is used to obtain energy underneath the surface of the earth which affects the stability of the land. This can lead to earthquakes.

During the production of geothermal power, gases like hydrogen sulfide (H2S), carbon dioxide (CO2), ammonia (NH3), methane (CH4), etc. can be released into the atmosphere. Some of which can contribute to global warming.

Although geo energy doesn’t enjoy the popularity of other renewable resources such as hydroelectric, wind, and solar, it’s an incredible, renewable, and relatively cheap alternative energy source.