Defects in engine cooling systems are a common problem.

The heat is generated in the engine due to the combustion of the air-fuel mixture which is why the Necessity of Cooling in an Internal Combustion Engine is required in Automobile engineering.

Hence this is done by air or water.

Each cooling system has its own advantages and disadvantages. 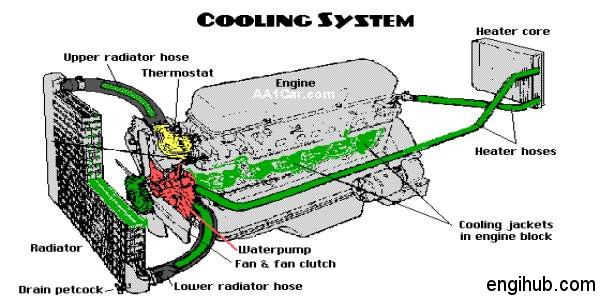 So, the most common defects occurring in water cooling systems are,

Water leakage and water evaporation are the main cause of water loss from the cooling system.

Water leakage may occur due to a faulty head gasket or loose cylinder head.

It also may be due to the cracked head or engine block, loosening of hose clamps, and radiator pipe leaks.

So, to stop such leakage, the head gasket may be replaced, the hose clamp may be tightened and the radiator pipe soldering.

Filling the water at the correct level in the radiator will compensate for the loss of water.

This is caused due to rusting or sealing of water jackets and radiators.

The other reasons are a defective hose, a defective water pump, a defective thermostat, slipping of a fan belt, blocking of the air passage in the radiator, and loss of cooling water.

The heat transfer from the wall of the cylinder to the coolant is mostly affected due to rusting and scaling that takes place on the walls.

This may be removed by washing the cavities with ordinary washing soda or some other chemical and reverse flushing.

Sometimes worn-out hose material goes into the water passage and accumulates there restricting the flow of coolant also.

Replace the defective hose at the earliest.

The circulation of air is affected by the slipping of the fan belt.

Hence tightened the fan belt as per requirement or replace it if required to remove the defect.

Also, Remove the greasy material if found on pulley grooves.

Clean the radiator by blowing air under pressure from the fan side.

Water must be filled in the radiator up to a required level to recover a loss of coolant.

Cooling is generally caused by a thermostat that opens too early or remains open at all times.

In some cases, it is observed that there is no thermostat employed or missing.

If the By-Pass valve remains open at all times, it results in the overcooling of water.

Hence to avoid overcooling, the defective thermostat must be replaced.

Early action should be taken to close the By-Pass valve.

To overcome this problem, the engine must be run idle for some time until it attains the proper temperature.

The water pump gives noise due to dry bearing or bushing.

Other causes are a loose pulley on the pump shaft, a loose impeller on the shaft, etc.

The proper cause of trouble may be found out and rectified.

If the temperature gauge on the panel is suspected to be giving incorrect readings the temperature of the cooling water is measured by inserting a thermometer in the radiator upper tank.

After that compared it with the reading of the gauge.

If the gauge is found defective it should be replaced.

Besides this information, you are suggested to read something more from below engineering books
So, Here you find the Best Engineering Resources for further details
Further Recommended Reading Internal Combustion Engines and Intelligent Engine Systems: Thermal Management and Advanced Cooling
If you like the post, share it with your friends and also on social sites.