Skip to content
Wastewater is a byproduct of domestic, industrial, commercial, or agricultural activities.It contains a large number of physical, chemical, and biological pollutants at varying concentration levels.
This treated water can also be reused for various purposes.In wastewater engineering, some particular words are used.
Before knowing more about the sewage treatment procedure, the concerned people must have the basic details in this field. 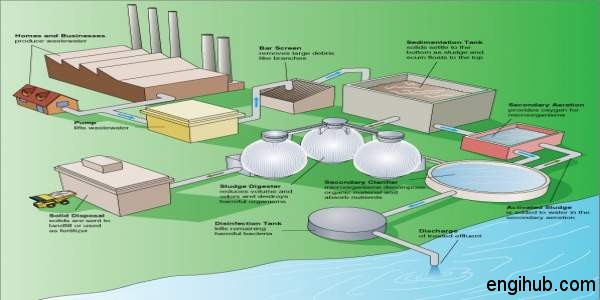 So, Below you will find some most important terms used in wastewater treatment

When the pH of the raw wastewater is 8.0, it means that this is alkaline.

It is the wastewater before treatment.

The Solids which cannot be removed by filtering are known as dissolved solids.

It is the mixture of activated sludge, wastewater, and oxygen, wherein biological assimilation occurs.

It refers to a brownish flocculent culture of organisms developed in aeration tanks under controlled conditions.

It is also a Sludge flock produced in raw or settled wastewater by the growth of Zoological bacteria and other organisms in the presence of dissolved oxygen.

It is the Clumps of bacteria and particles that have come together to form clusters of small gelatinous masses.

It is a process where colloids come out of suspension in the form of a flock or flakes.

So, they are a group of universally distributed, rigid, essentially unicellular, microscopic organisms lacking chlorophyll.

So, to measure the strength of wastewater the BOD test is used.

The BOD determines the milligrams per liter of oxygen required during the stabilization of decomposable organic matter by aerobic bacteria action.

Also, the total milligrams of oxygen required over a five-day test period to biologically assimilate the organic contaminants in one liter of wastewater maintained at 20 degrees Centigrade.

It is the milligram quantity of oxygen required to chemically oxidize the organic contaminants in one liter of wastewater.

Aeration is the process by which air is circulated through or mixed with or dissolved in a liquid or sludge.

It is the biological decomposition of organic matter in sludge resulting in partial gasification, liquefaction, and mineralization of putrefaction and offensive solids.

Anaerobic digestion is a bacterial process that is carried out in the absence of oxygen.

Aerobic digestion is a bacterial process occurring in the presence of oxygen.

It is the tendency for particles in suspension or molecules in solution to settle out of the fluid in which they are entrained and come to rest against a wall.

So, Here you find the Best Engineering Resources for further details
Further Recommended reading Industrial Wastewater Treatment and An Introduction to Primary Wastewater Treatment
If you like the post, share it with your friends and also on social sites.