Skip to content
In very ancient days water wheels were developed to convert hydraulic energy into mechanical energy. Nowadays water turbines are used for the same purpose.
Basically, these water wheels are used to lift water from wells for irrigation purposes. Due to their very slow-moving speed, water wheels are not suitable for all types of purposes, especially energy generation.

Hydropower was available mostly in rural and mountainous regions. So, it was necessary to install mills that are run by water wheels near the power stations. 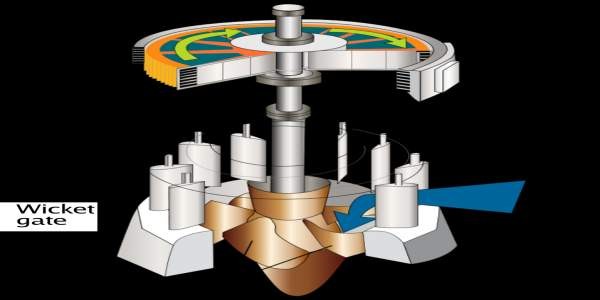 So, Why Water Turbines Are Developed?

Hence to overcome the problems arising from the water wheel mechanism, a lot of research was conducted by numerous scientists and engineering people.

The water turbines developed in those days can be operated under very high water heads and at higher speeds.

For driving machines in industries, electricity is widely used. Hence to cope with the increased demand for electric power, high-speed water turbines are designed.

Due to the rapid increase in the use of electric power, the transmission of electricity from the remote hydropower station to far-off places was considered necessary.

So, Recent Trends In Electric Power Generation Are

As the demand for electric power increases day by day, engineers and scientists started to focus on the different ways to generate it. These days electricity is generated in the following three ways,

Compared to these two forms, Hydroelectric Power has more advantages.

So, How Water Turbines Are Classified?

What Are The Advantages Of Water Turbines?

02) They can operate at a very high speed.

04) They have a very long working life.

Besides this information, you are suggested to read something more from below engineering books
So, Here you find the Best Engineering Resources for further details
This is a little glimpse hence further recommended reading Power Plant Engineering and Modern Turbine Practice and Water-Power Plants
If you like the post, share it with your friends and also on social sites.