In Hydrodynamics engineering the Motion of Liquid and the Forces causing flow are covered.

In this post, I will cover some topics of Hydrodynamics. 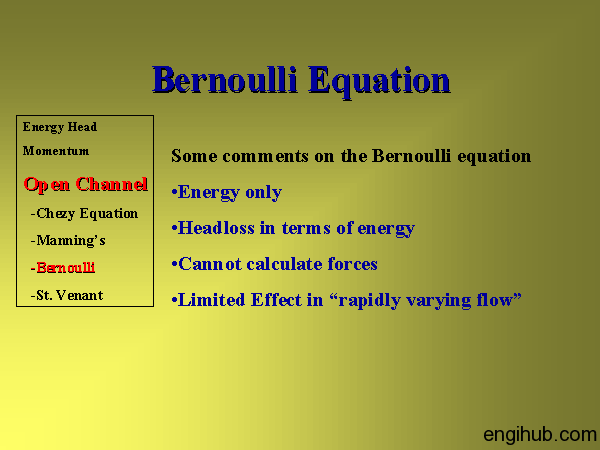 Energy means the capacity to do work.

Mainly three important Energy Forms are possessed by a Liquid, these are as follows.

It is the energy possessed by a Liquid particle, by virtue of its position.

It is the energy possessed by a Liquid particle, by virtue of its Motion or Velocity.

This is the energy possessed by a Liquid particle, by virtue of its existing Pressure.

It states that “For a perfect Incompressible Liquid, flowing in a continuous stream, the total energy of a particle remains the same, while the particle moves from one point to another”.

There is one assumption that “there are no Friction Losses in Pipe”.

01) The Velocity of a Liquid particle in the center of a pipe is maximum and gradually decreases towards the walls of the pipe due to friction.

Thus while using Bernoulli’s Equation, only the Mean Velocity of the Liquid should be taken into account because the Velocity of a Liquid particle is not uniform.

As per assumption, it is not practical.

02) There are always some external forces acting on the Liquid, which affects the Flow of Liquid.

Thus while using Bernoulli’s Equation, all such external forces are neglected which does not happen in actual practice.

If some Energy is supplied to or extracted from the Flow, the same should also take into account.

03) In Turbulent Flow, some Kinetic Energy is converted into Heat Energy, and in a Viscous Flow; some Energy is lost due to Shear Forces.

Thus while using Bernoulli’s Equation all such losses should be neglected, which does not happen in actual practice.

04) If the Liquid is flowing through a curved path, the Energy due to Centrifugal Forces should also be taken into account.