As you know, electric motors are used to drive air compressors.

These electric motors are of different types as per the requirement of the customer.

As different electric motors are used, different type of starters is required to start these motors.

An electrical engineer concerned might better know about the starters.

But to understand the basics of starters, I have shared information in a simple format. 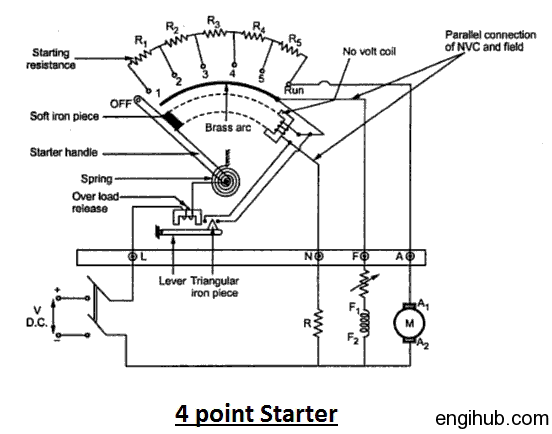 These are used where starting current limitations do not permit the use of DOL Starter.

In Star-delta starting, the motor is started in the “Star” connection.

The connection is changed over to “Delta” when the motor has reached nearly 80% of the rated speed, and starting current dropped to the lowest.

By connecting the motor in “Star” during the starting period, the impressed phase voltage is reduced58% of the voltage in the “Delta” connection.

The corresponding current in “Star” is thus only one third that in “Delta”.

By starting in “Star” the current is reduced to only about 2 to 2.5 times the rated current.

The motor is started in “Star” and once it has peaked up speed, its connections are changed over to “Delta”, by means of a timer in an automatic type starter and by manual in manually operated starters.

This time varies from 6 seconds to 12 seconds or more according to the load factor.

Manually operated starters are oil-immersed types, where the fixed and moving contacts are totally immersed.

Normally this starter is of the automatic type, simple, consisting of only one main contractor.

Its starting current is 6 to 7.5 times the motor rated current.

In the case where the direct starting method cannot be employed because of the high initial peak current, the Squirrel Cage Motor has to be started on reduced voltage i.e. Star-Delta starting method.